[ESG Column] Hydrogen to save the stricken Earth

The environment has been emerging as a more important issue than ever before. The carbon economy where fossil fuels are prevalent sources of the society and industries is on the way to be replaced by the hydrogen economy. Although the realization of the hydrogen economy still requires an astronomical amount of money and enormous human resources, special attention is being paid to hydrogen energy as a savior which can rescue the Earth as well as keep promoting human development. 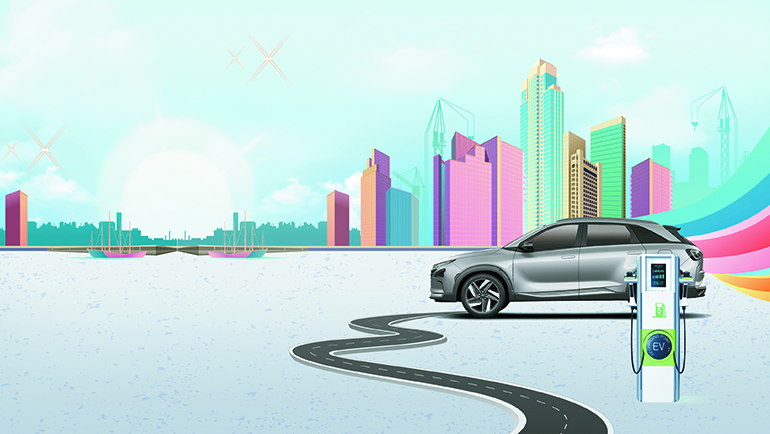 Hydrogen accounting for 75 percent of the universe’s normal matter

The world is facing serious environmental pollutions and exhaustion of energy sources. Humankind has rapidly developed based on the carbon economy since the Industrial Revolution. As a result, however, the rapid development ironically has deteriorated environmental pollutions. Currently, the world depends on fossil fuels for about 85 percent of global energy supply. Over time, the shift to a carbon-free society occurs at a more rapid pace, on the ground that it is imperative to transform conventional energy sources into clean and infinite ones for the sake of the survival and sustainable growth of human beings. In this regard, nations around the world are preparing for a transition to the carbon-free economy.

Along with renewable energies including solar, wind and water power, hydrogen is considered one of alternatives to the carbon economy. Hydrogen is the most perfect clean energy that human beings have discovered as well as the energy source which can be infinitely produced. Hydrogen, which forms water (H2O), is the lightest of all gases and the abundant element in the Earth, making up 75 percent of the elemental mass in the universe. Hydrogen combines with oxygen, creating electricity and emitting only water.

In actuality, hydrogen is utilized in producing various products. For example, hydrogen is needed to produce ammonite, which contributes to solving food problems. It is also used in a wide range of industrial processes such as production of synthetic fuels, metal refining, oil sulfurization and heat sources.

There are a variety of renewable energies in the Earth, of course. However, the renewable energies using power from the nature are difficult to control their outputs depending on weather conditions and regions, inevitably leading to surplus or lack of power. On the other hand, hydrogen can be stored and used later when hydrogen-based power remains unused. Hydrogen gas can be stored in a way that transfers the remaining electrical energy to hydrogen by electrolysis of water, and the stored hydrogen gas is supplied to hydrogen fueling pumps and utilized as a fuel for hydrogen-powered electric vehicles. Hydrogen can also be used as an electrical energy through power generation based on hydrogen fuel cells. Moreover, hydrogen can be compressed and liquefied, making its storage and transportation easier. Other electrical energy sources generated from renewable energies have limitations in terms of large-scale storage and long-haul transport. Hydrogen, however, can play a role of an “energy carrier” in that it is easy to be stored and transported, like oil, coal and natural gases.

McKinsey & Company, a global management consulting company, forecast in January 2017 that the global hydrogen market will grow by six percent annually on average to reach 2.5 trillion dollars by 2050. In September 2020, the Goldman Sachs Group, a leading global investment banking and management firm, forecast the global hydrogen market to amount to 12 trillion dollars in 2050. In addition, the global CEO-led initiative Hydrogen Council recently projected the investment in the hydrogen economy to reach about more than 30 million dollars in 2030. As such, the world is expecting to change to the hydrogen economy in the near future and responding promptly to the shift. Major countries are accelerating their efforts to seek innovation for securing technological competitiveness of their companies in order to take the upper hand in the global hydrogen market. Global leading companies are promoting bold investments and technological development for the hydrogen economy.

Korea is attempting to keep abreast with such global trend. In the 2018 survey, titled “Macroeconomic Impact and Social Benefits of the Hydrogen Vision for Korea,” McKinsey & Company forecast the hydrogen demand in Korea will reach about 17 million tons in 2050, accounting for about 20 percent of final energy consumption. This will lead to reducing about 17 percent of the amount of fine dust generated, creating jobs for about 600,000 people and resulting in about 70 trillion-won economic impact through expansion of the hydrogen industry and sales of related equipment, according to the survey.

The Korean government announced the “Hydrogen Economy Roadmap” in January 2019 and suggested detailed strategies and directions on technologies of hydrogen-fueled cars and hydrogen fuel cells. According to the roadmap, the number of hydrogen-fueled vehicles in Korea currently amounts to about 10,000 and will increase to 81,000 in 2022, 850,000 in 2030 and 6.2 million in 2040.

As Korea imports 95 percent of the carbon energy consumed in the country, it is advantageous to shift to the hydrogen economy in aspect of energy security, through which Korea can achieve energy independence, along with eco-friendliness. Moreover, Korean industries can create new growth engines by vitalizing the hydrogen economy.

Korea is highly competitive in shifting to the hydrogen economy. Korea has the world’s best technologies of hydrogen-fueled vehicles and extensive market experience in the operation of fuel cells for power generation. Korea’s systems designed to establish the infrastructure for high-pressure gases and manage safety are comparable to those of developed countries, and there are leading Korean companies with regard to vessel transportation, establishment of hydrogen infrastructure and hydrogen generation technology.

The Korean government announced the “Eco-friendly Hydrogen Economy Master Plan” in September 2005 and established a plan to supply hydrogen vehicles and vitalize the hydrogen market in October 2015. With the publication of its mid- and long-term “Hydrogen Economy Roadmap” and “Hydrogen Safety Roadmap” in January and December 2019, the government announced its vision that it will grow into the world’s no. 1 country in the hydrogen economy. In October the same year, the government announced the “Future Car Industry Development Strategy 2030” which outlined its commitment to taking the leap towards the world’s most competitive country in future cars in 2030. Korea aims to raise the proportion of electric and hydrogen cars to 33 percent of new domestic car sales and to hold 10 percent of the global market share by 2030.

Hyundai Motor Company is always on the top of the list when it comes to Korea’s hydrogen economy. Taking the lead in global hydrogen mobility technology, Hyundai Motor announced “FCEV (Fuel Cell Electric Vehicle) Vision 2030” in December 2018 and reaffirmed its plan to secure a 700,000-unit-a-year production capacity of fuel cell systems by 2030 to mass-produce 500,000 hydrogen-powered vehicles and to supply 200,000 for hydrogen mobility production. As part of the “2025 Strategy,” Korea’s leading automaker launched “HTWO,” a new brand to represent the group’s world-leading hydrogen fuel cell system, and considerably increased its investment in hydrogen mobility and electrification development to 14.9 trillion won. 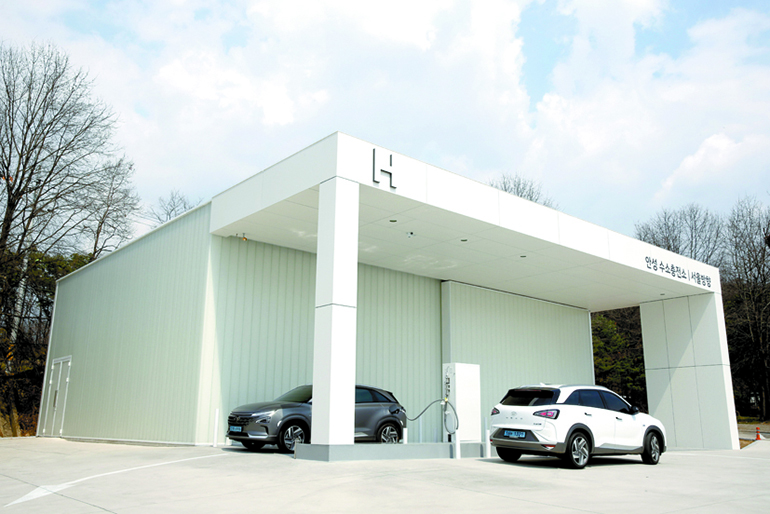 To gain the upper hand in the global hydrogen market, the Korean government allocated 824.4 billion won as a budget for the hydrogen economy in 2021, in line with the hydrogen economy-related strategies of Hyundai Motor Company and other companies. On top of this, the government is offering various policy supports to enable domestic companies to create a virtuous cycle of technological development, localization & commercialization, and entering the global market & market preoccupation. When the government’s initiatives and private investment plans of domestic companies including Hyundai Motor create a synergy effect, Korea is able to become the spearhead as a leading country in the global hydrogen economy as well as in being carbon neutral.