Jungdo, an island in Chuncheon, Gangwon-do, where the Bukhangang River flows. A new world has opened on an island sparkling with ripples. The Lego kingdom, blooming at the fingertips, unfolded before our eyes. Legoland, one of the world's top three theme parks along with Disneyland and Universal Studios, finally has opened for the first time in Korea.

Having FUN! Legoland for Both Children and Adults to Enjoy

Chuncheon Bridge stretches straight under the clear sky. As if crossing a magical bridge that leads to another world away from daily life, the exuberant colors of Legoland catch your eyes as you traverse the Bukhan River. In front of the gate, seemingly made by stacking colorful large Lego bricks, everyone's footsteps are filled with excitement! Legoland during the pre-opening were bustling with visitors taking pictures next to large and small Lego structures such as somewhat familiar Captain Hook, to name a few.

Legoland Korea, the first global theme park in Korea, has an area of 280,000㎡. Equivalent to 39 soccer fields, it boasts the largest scale in Asia and the second largest in the world after Legoland New York. The theme park, consisting of a total of seven clusters, including Brick Street, Bricktopia, Lego City and Mini Land, houses 56 buildings and 19 attractions. The hotel, four-story high with 154 rooms currently under construction, will be responsible for visitors' comfortable stay from July this year. 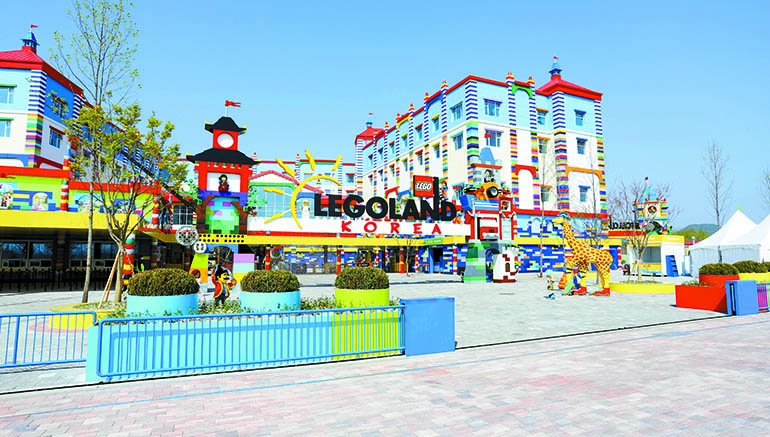 At the site of numerous Lego sculptures, rides, and buildings with unique concepts, Hyundai E&C was in charge of building all structures and infrastructure except for Lego models, signage, and model production. It led the entire process necessary to create Legoland, from measurement of accurately putting in place facilities including buildings and rides to construction of buildings, installation of rides, electric wires and piping facilities.

From trains running on rails, towering observatories, and spinning rides, each vibrant color brings life to the theme park. In particular, thanks to applying Lego's unique color to most of the materials, Legoland's unique identity, setting it apart from other theme parks, is clearly revealed. Among others, the first thing that attracts visitors’ attention is the façade of the hotel, which seems to have been made by assembling the bricks. It is located on the way to enter Legoland, but the overwhelming color makes you feel as if you have become one of the “mini figures in the Lego world.” It was not so easy to apply the pre-defined color to the building. In order to realize vivid colors, multi-color steel plate technology was applied to the exterior finish. It is a method of directly applying color graphics to steel plates, and unlike monochromatic construction with aluminum panels or coloring with sheet paper, various colors could be expressed clearly. The distinct representation of the color boundaries was the key to making art works by stacking bricks one by one.

After going through the Brick Street, visitors start exploring Legoland! Families who want to visit Lego cities such as police stations and airports can run to Lego City, and lovers who want to enjoy the thrill of roller coasters can run to Lego Castle. Individual cluster inspired by the themes of the Lego series were developed surrounding the most centrally-located Mini Land. In fact, Mini Land which features miniatures of Korean landmarks made out of brick, is overflowing with “wow points” that exceed our expectations. More than 832,000 bricks were used in the Seoul Zone alone. There is a truck full of goods running on the road and a button device enabling a mini figure to push hard the rocking rock of Mt. Seorak. Visitors are first surprised by the scale of the brick, and then by its sophistication again. In addition, sections fully reflecting the concept of famous series, such as "Sea of Pirates" where you can enjoy a cool water gun fight and the oriental-style "Lego Ninja World" where you feel like you have to fight against a group of evils, were fascinating enough to capture the hearts of Lego fans.

[ By installing and manufacturing a train that traverses the Mini Land and a crossing gate crossed by Legoland Express, the actual railroad ambiance was created and visitors’ safety secured. ]

[ Ninjago-concept cluster, considered as the best series. The exterior was finished with Stucco for a smooth surface. ]

Cheers are heard in the Lego Castle cluster. A dragon escaping from a medieval castle shoots into the sky. The most thrilling attraction in Legoland, Dragon Coaster, is in operation. The gaze of people heading into the castle with a lot of expectations is geared towards the castle wall for a while. “Wow, it looks so real!” The stone walls were implemented by repeatedly pouring cement over a concrete wall and scratching them before the cement hardened. Many enthusiasts who had opened their wallets countless times to buy the Lego series also gave a thumbs up to this detailed description. Most of the components, including 56 buildings in Legoland, differ in shape, material, and applied construction methods. Finding unusual details from brick representation to art painting to street facilities is another fun comparable to riding attractions. This thought-out mise-en-scene was the result of the numerous meetings held between the site and the project client to discuss mock ups. 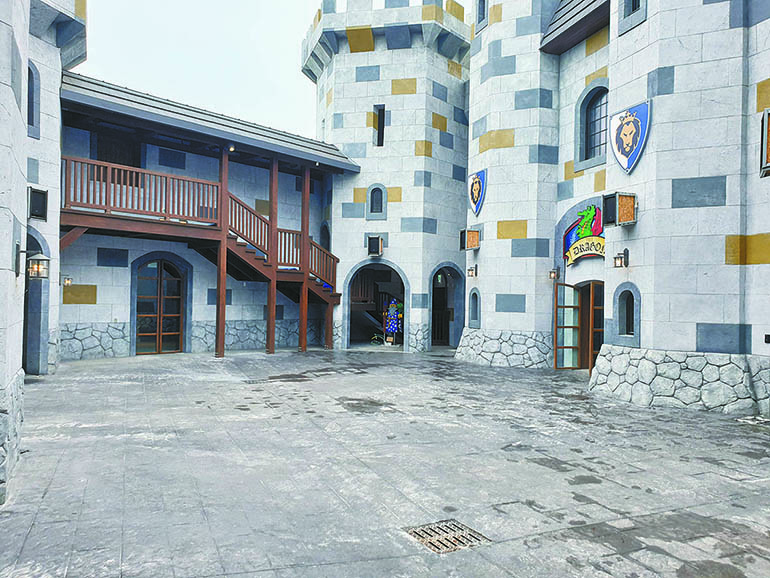 [ Texture of the stone walls of a medieval castle was implemented with a technique of directly scratching cement that has not hardened. As such, to represent the images reflecting the series themes, numerous mockups were developed. ]

The site cited close communication between the client, overseas vendors, and other related companies as the key to successful site operations. Due to the huge scope of construction and frequent design changes, it was a big deal to organically coordinate schedules for each section and process in the event of interference with facilities, equipment, and processes. Since many stakeholders had to collaborate, it took a while to make a decision, but since everyone remained true to the principles of quality and safety, the construction was completed without a single accident.

32 months of working around the clock to develop a safe and enjoyable Legoland so that all visitors can have a fun time… Finally, a dream theme park will open doors in a week. If you want to fall in love with Legoland's charm, entering the venue with light legs and leaving with heavy legs, we suggest you prepare three things in advance: “enough time,” “strong body" and "thrilled heart.”

Construction Site of Roadbed of Section 12 of the Donghae Line’s Pohang-Samcheok Railway.