A tunnel boring machine (TBM) is an automated machine used to excavate tunnels, lay down wall segments and dump soil and rock. The key advantage of using TBM is that it limits the disturbance to the surrounding area, such as noise and vibration. There are also some environmental benefits. Hyundai E&C is regarded as a technology leader in the use of TBM in its tunneling work. It has successfully completed a number of tunneling projects using TBM both in South Korea and overseas and has also tested some equipment that is the first of its kind in the world.

The equipment is designed to cut through rock strata by mimicking the operating mechanism of TBM tunneling. Digging performance is tested over several tens of times on 40cm-thick rock samples which are 1.6m wide and 1.6m tall. The load and spacing of cutters were carefully measured to achieve an optimal design, which has since been patented.

This is a test device created to measure the disc cutter wear of a TBM. It can predict when the cutter will need to be replaced and the positions and digging speed of TBM within a 4% margin of error.

The test equipment is a 1:10 scaled-down version of an EPB TBM. It is capable of simulating different digging modes on the actual TBM as well as foam injection, which allows estimation of key digging operation factors such as load, torque, and the chamber pressure of the TBM. 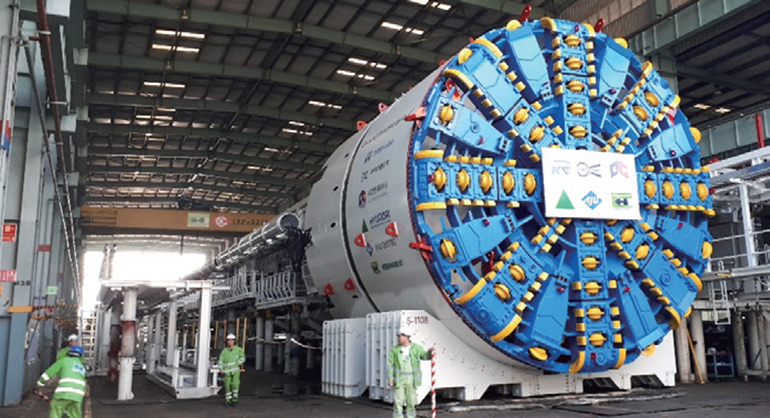 Leading the global trend in tunneling: TBM
The prominence of the TBM method, which allows effective digging in a safer and more environmentally sound manner, is surging. TBM digs tunnel using a rotating cutterhead mounted on the front of a TBM which also mounts prefabricated wall segments as it moves forward. TBM methods have many advantages such as low noise and vibration which in turn lead to a reduction in complaints. Other advantages include minimization of the impact on groundwater through waterproofing and close to zero dust and pollution generation. Digging speed is also three to five times faster compared to drilling and blasting methods such as the New Austrian tunneling method, which in turn leads to reduced construction time and costs.
Thanks to the many benefits including faster digging speed, increased safety and economic benefits, the TBM method is continuing to improve with support from the construction industry. TBM methods are being employed in an increasing number of tunneling projects in cities, undersea and in mountainous regions. Its use is increasing around the globe, overseas and in South Korea where TBM was first introduced in 1985.
Hyundai E&C is contributing to the growth of its business with TBM-related patents such as Rotary Cutting Machine tester, New Abrasion tester, Micro EPB TBM and Soil Abrasion Penetration Tester which are ”World’s first” and ”In-house developed”.
#Construction Technology#Tunnel#TBM
PRE