As we drove for about an hour from the headquarters in Gye-dong toward Banghwa-ri-gil, Paju-si, Gyeonggi-do, a remote drone flying freely over the sky stood out. Following the drone, we arrived at section 2 of the construction site of Gimpo-Paju National Road 400. This is the place of Hyundai E&C’s smart tunnel innovation and the venue for the 2022 Hyundai E&C Tunnel/Smart Construction Technology Showcase. Korea’s leading constructor currently operates construction type-specific smart innovation sites by business divisions, and the Infrastructure Business Division manages innovation sites in the fields of smart tunnels, ports, bridges, and earthworks. Thanks to the early arrival, we could take an up-close look at Hyundai E&C Technology Showcase.  What drew our attention before the opening was the four-legged walking robot “Spot” of Hyundai Motor Group’s Boston Dynamics and unmanned ground vehicle (UGV). It is an unmanned robot that can be used in various ways by installing devices such as LiDAR, laser scanner, and a 360-degree camera for unmanned surveying, on-site safety patrol, and remote field monitoring. We were in awe as remotely-controlled Spot and UGV moved around. In particular, seeing the robot dog Spot detecting and avoiding obstacles on its own, made us think that having companion robots, in addition to companion animals, as part of our daily lives, is not a far-fetched idea at all.

Next, we walked to the Smart Glass booth. As I wore AR HoloLens, the manual and both hands appeared in a graphic form in front of me. When I clicked on the navigation item with my digital hand, the showcase venue seemed to have quickly transformed into the end of section 2 of the Gimpo-Paju construction site. In the digital world, the frame of the actual construction site and the 3D BIM modeling screen seemed to overlap. When I touched the parts I wanted to know more about with my digital hands, items including materials, specifications, and history were displayed in detail. Using the smart glasses, employees in Gye-dong headquarters and those on-site can seamlessly have video conferences. Using HoloLens, 3D virtual construction works and physical construction environments can be compared and constructed, allowing for more specific and stringent quality control. A booth staff explained, “Through HoloLens, you can experience mixed reality (MR) where reality and the virtual world interact,” adding, “Hyundai E&C is accelerating the era of digital twin' in the construction sector.” 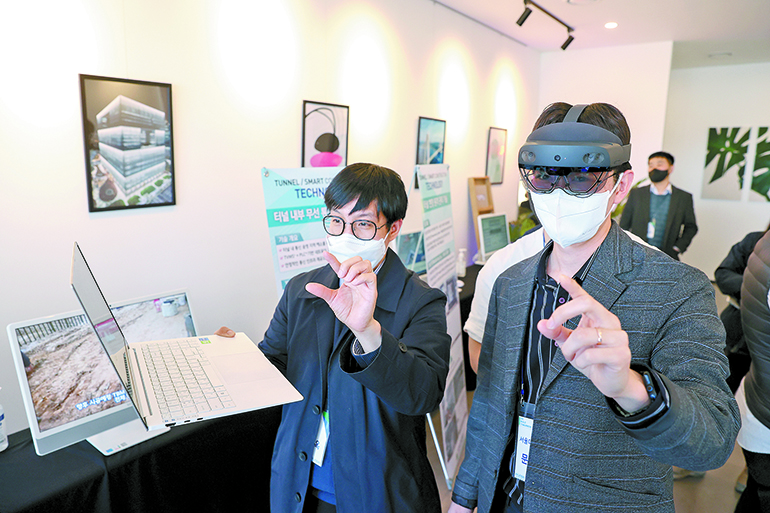 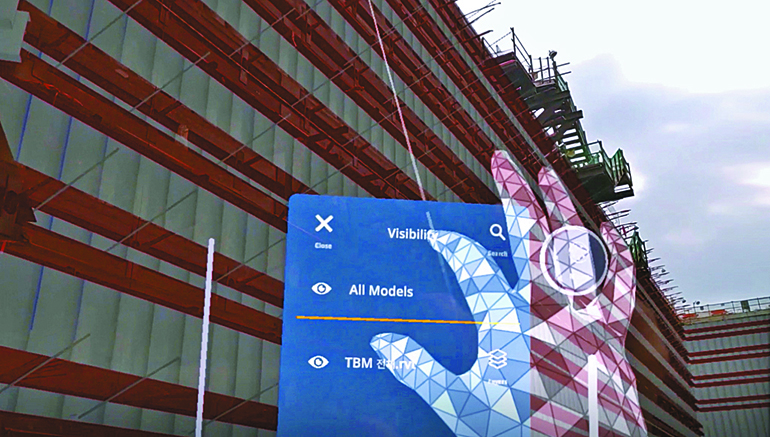 [ When wearing smart glasses, the frame of the actual construction site and the 3D BIM modeling screen overlap. ]

Afternoon, the press members, Kim Ki-beom, head of Hyundai E&C’s Infrastructure Division, Kim Yoo-bok, head of Korea Expressway Corporation's R&D Division, and Cho Sung-min, head of the Center for Smart Construction Technology, and officials from the government agencies, industry and academia arrived one after another. Participants had a tour of the booths installed in and out of the Han River Tunnel Pavilion, and seeing from their faces, it was obvious they were very much looking forward to seeing the soon-to-be presented smart construction blueprint of Hyundai E&C. 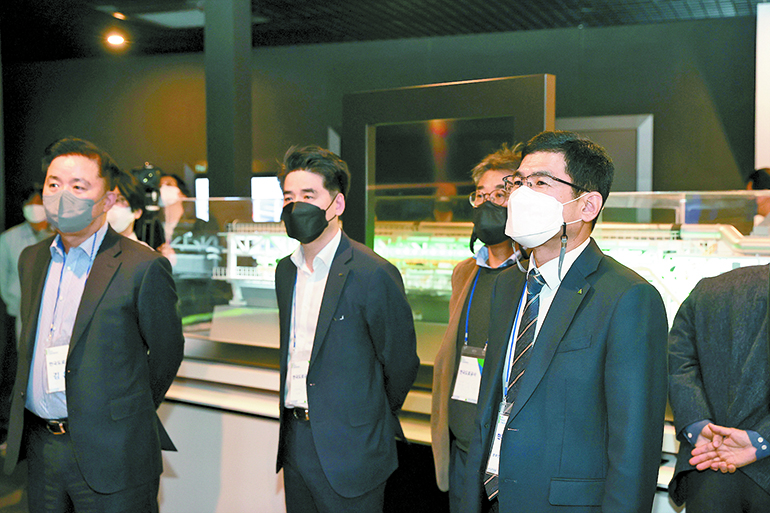 The participants could freely look around the technology showcase. The first thing that caught everyone’s attention was the TBM exhibition hall named “Into the Tunnel.” The exhibition hall was a small, ordinary room of 12㎡ surrounded by three white walls. There was a projector on the ceiling, but the presence of no element that could be associated with digital technology. Other participants also sat puzzled at first. However, when the video was played, the ambiance was completely changed. The ordinary room felt like the inside of a mega-huge TBM, which offered a very interesting and unique experience to participants as if they were watching the actual drilling inside a tunneling machine. One could feel the maximized sense of space because the equipment drawing was made in 3D and implemented in VR. Next to the TBM exhibition was a booth where you could understand the internal structure of TBM with VR devices. The guide staff said, “By implementing the construction stages of a specialty machine TBM with VR simulator, participants can experience all construction processes virtually,” adding that, “Immersed safety education is possible.” 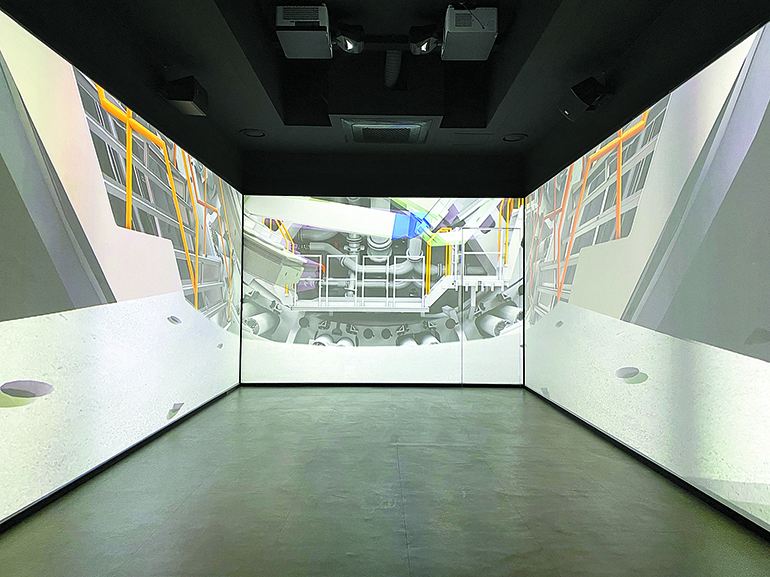 [ TBM exhibition hall. One can feel the maximized sense of space thanks to the 3D implementation of equipment drawing into virtual reality. ] 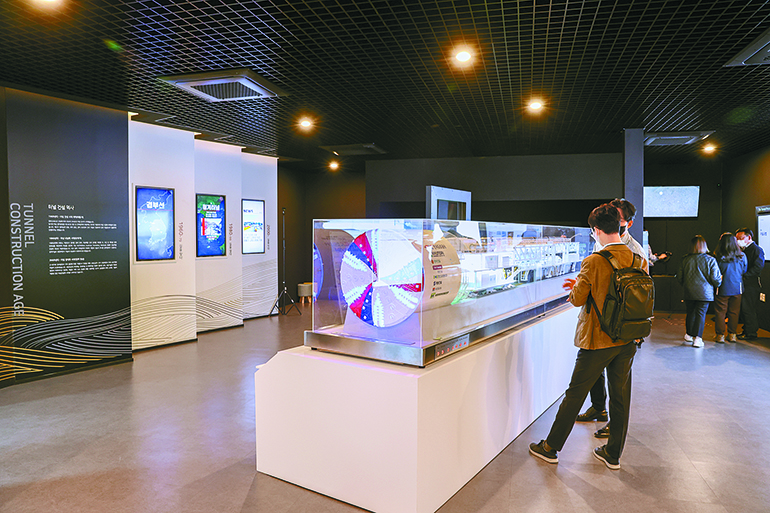 On this day, a large number of platforms were introduced based on which the headquarters and the sites could co-work remotely. Participants tried clicking the menus on the BIM-based digital status board “HIBoard(Hyundai IoT Smart Dash-Board)” developed by Hyundai E&C to check all information regarding site operations such as TBM tracking, PC absence history management, and performance comparison. Then such information is connected in real-time with the Head Office Control (HOC) Room, allowing the headquarters to do integrated management of the sites.

The site visit was guided by site manager Ahn Byung-chul. Shortly after getting on the bus in front of the Han River Tunnel Pavilion, a vast area of land unfolded in front of our eyes. Section 2 of the construction project of Gimpo-Paju National Road 400 is a project with a total length of 6.734km with four round-trip lanes, including a 2,860m long tunnel construction. It is also called the “Han River Tunnel Site” because it is the first road tunnel that passes through the lower part of the Han River in Korea. 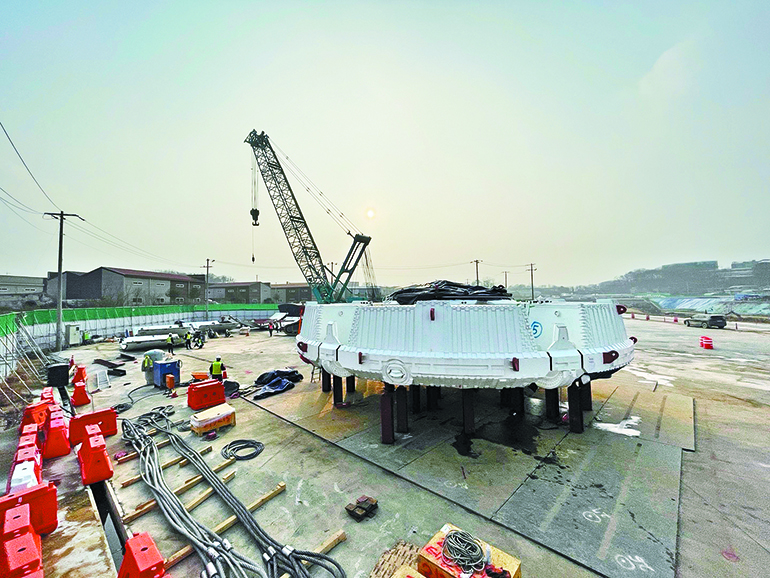 [ TBM production site. A huge TBM with a diameter of 14 meters, an overall length of 125 meters, and a total weight of 3,200 tons is used for tunnel construction at section 2 of the construction site of Gimpo-Paju National Road 400 where the technical demonstration was held. ]

The progress rate is 18.25%, and currently, their temporary earthwork is underway to initiate the tunnel drilling. A huge TBM with a diameter of 14m, an overall length of 125m, and a total weight of 3,200t, is used for tunnel construction, which is the largest in Korea and is not common overseas as well.  Manager Ahn said, "Considering the high-pressure environment of up to five times the atmosphere and the specificity of the complex ground mixed with soil, sand, and bedrock, a highly safe ‘two-pressure shield TBM method’ is used," explaining that "The entire process from tunnel drilling to structure construction and soil discharge will be mechanically automated."

Contrary to the explanation that the site was busy with construction, only heavy equipment was busy moving around with no workers to be found. A site worker said, "This is because the entire process of work is unmanned and mechanized," adding, “The manpower here is about half the number of people at the peak time of civil engineering sites of the same size.”